It's been a while but things have been well and training for the Mesa-Phx Marathon (formerly the Phoenix Marathon which by the way didn't go through Phoenix at all) went great although I didn't get as many long runs in as I would have liked. I also ran 3 Half Marathons since Big Cottonwood at 1:42:47, 1:40:05 and 1:39:43 so I felt like I was good going into the race. 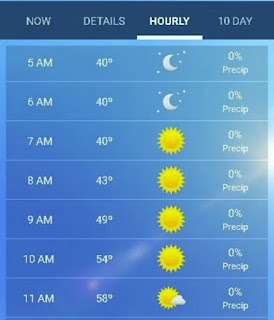 Having run the race last year as well as being able to train on the course is also a big plus since I knew what I was in for and able to plan things out better. Also, this year the weather was going to be much cooler than last year's 70s-80s so the racing gods would be smiling down on us.

Turning 50 last year helped as it gained me 5 minutes toward a BQ, so going into the race I had 3 goals.

Gold - 3:27 which should be good enough to get into Boston.

Silver - 3:30 which would meet the Boston qualifying standard.

Of the 3, none of them were a given considering my previous best was 3:53:02 back in September but I was confident that I was at least capable of the 3:40 due to my training and my plan.

My thought going into the race was that in order to achieve any goal, I would need to do the first half in about 1:40 since that is where the course is the fastest. From there I would need to go anywhere from 1:47 - 2:00 to reach any of the 3 goals.

I managed to get well fueled, everything ready and in bed early and on race day was up at 2:15 in order to get to the finish in order to catch an early bus to the start.

[One of my gripes about this race is that in order to catch a bus I have to drive 35 miles to the starting area but due to the fact that I live on the same side of the valley, I get within 5 miles of the start on my ride in. I wish they would offer a shuttle to those of us that live out this way.]

Once at the start there was nothing to do but wait and chill. Literally that is until the kids volunteering tried to get the fires lit, luckily I had planned for the cold. Tip to the youngsters, big wood and newspaper doesn't make a fire. You need to get some kindling going first.

With an hour plus before the race there was plenty of time to fuel up and although the porta-potty lines were long the desert scrub made for easy relief. Just had to warn the out-of-towners to be wary of the chollas that hurt like hell if you get stuck by one.

At a few minutes to start I got my warm gear off, made one final stop and made my way to the line and was off with the gun. Lucky for me I was toward the edge and as I began to run, I noticed one shoe was too loose so I quickly got out of the course and tightened it up before I crossed the start. No need to lose any time right at the beginning.

The first 5 miles went as planned but as I was drinking my 1st 10oz bottle I got a strange buzz from the Garmin letting me know that the memory was full. What!!!

This was not what I needed and began to freak out over the possibility of not having timing. I began to futz with the watch which was slowing me down even more than I wanted on the biggest uphill section of the course so I decided to let it be and got my head back into the race.

As planned I was right around 1:40 pace as I could see the Half Marathon starting line coming up (from there both courses are the same) and opted to make quick use of the porta-potties they had set up. Because of this stop I crossed the halfway mark at 1:42:20 (7:49); a bit slow but still right there.

Around mile 19 was where it started to get tough as I clocked an 8:59 minute mile and my legs began to feel heavy. My confidence also began to wane as I was soon being passed by the 3:35 group and knew it would be futile, as well as counterproductive to try to keep pace. I just had to run what my legs were willing to give me.

Although I was slowing down and starting to hurt I was in a good place mentally and had my music to keep me going. I also was thinking about our friend Michelle Wolfer who passed away in January after a 2 year battle with cancer. Michelle was a source of great inspiration to the running community as she refused to give up and even ran the 2016 NYC Marathon in November. We all miss her kind dearly.

It was not long after I passed the 24 mile mark that another group of runners began to pass me by and among them was the 3:40 pacer. The first thought that went through my head was "Shit!" followed by thinking the was no way I could keep up. Fortunately I have that competitive voice that began screaming "Suck it up buttercup and get fucking moving! Now!".

Those first few strides after have been doing the marathon shuffle really hurt but I was too close not to go for it. At first I was struggling to keep up but soon I was holding my own as I kept pace. I was also into the metal portion of my playlist which was a big help to my cadence and finished 25 at 8:39.

By the time we had passed the mile 25.5 mark I was feeling really good and decided it was time to fly. This could have been a major miscalculation, but I knew there was a was a nice downhill coming up and always like to finish strong. Besides how can you not run hard when you have these last 4 songs on your playlist?

With the downhill done, the race turned into the mall where the finish was and I pushed as hard as I could. The crowd was large and cheering loudly for the last 100 or so yards and even though my vision was a bit blurry, as I got closer I could see that the clock was only at about 3:38:50. I WAS GOING TO DO THIS!

Pressing harder as I crossed the line, I stopped my watch, stumbled forward to get my medal, a water and a cold towel before draping myself over a railing for the next few minutes as I couldn't move another inch. After I recovered enough to move I hydrated, had some wonderful French Toast and went to the results tent to find that my official time was 3:39:10. Mission accomplished and a 13:52 PR over Big Cottonwood in September. 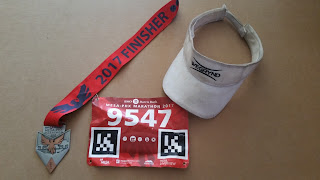 So there you have it. I was really beginning to doubt in my ability to BQ but now I really believe it is possible. The more I run these the more I learn and understand what I need to work on. Hopefully number 6, which will be back at this race next February 24th, is the charm.

In closing, I'd also like to take this opportunity to thank you everyone of you for your support. Without your inspiration and motivation it would be unlikely that I'd have kept at it for this long. I cannot thank you enough.