The time is just flying and I cannot believe that race day is only four weeks from today. At least I'm in a better place than I was last year at this time when my PF was to confine me to the elliptical for a couple weeks. 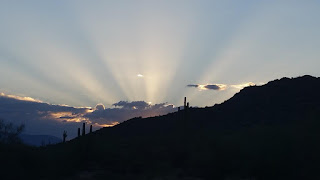 Today I was looking forward to logging some miles on Usery Mountain since it's been over a month since I was there last.

Fortunately I was in bed early last night but although I didn't get the best night's sleep, I still managed to be up and out the door by 5:30. Let me just say that this paid off as the sun was just about to peak over the mountain as I was set to begin the run.

Once again the plan was for 1 up, 1 slight down, 1 slight up, 3 down, 2 up, rest/rehydrate, 2 down and 2 up. This makes for 5 good mile speedwork on the 4% grade while getting in some hard uphill miles as well. Today was actually the first time I saw multiple runners out but as usual there were many bikes on the mountain. 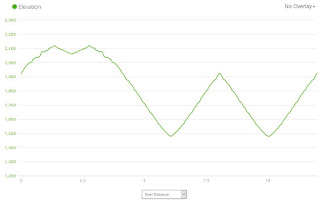 One of the goals for this outing was push it a bit harder on the uphills and I was lucky enough to have a cyclist who was going up at a pace around 9 and felt like chatting. Too bad I could only keep up with her for about a half mile on one of the steepest portions of the run.

I have to say that I was very happy to get in a productive run with the major downhill portions coming in at 7:24 - 6:55 - 6:53 - 7:15 - 7:24. The last 7:24 would have been better had I not experienced a wardrobe malfunction and had to stop to retrieve my Nathan fuel belt which fell off as I was trucking along at a 7 minute pace.

One thing that helped was having the metronome app going on my phone. I want to find a good cadence and found that my sweet spot was right at 182 bpm on the downhill. This should come in handy on race day for sure.

In all, things have been going very well thus far in August. In the last three weeks, I haven't bagged any runs; managing 31, 39 and 34.5 quality miles per week. The finish line is in sight so it's time to stay focused. I could still use to lose 10-15 pounds to get down to a race weight I like but I''m down 10 and have been more fat adapted lately.

One other "hack" that I have tried is to wear orange glasses  a couple hours before bed and have to say that they seem to be helping. The premise it to avoid blue light at night to promote sleepiness. Given the world we live in, it is just too hard to refrain from TV, the computer or phone so this is a viable alternative.

Now I'm not sure if these glasses are actually working or if it is the placebo effect but I actually feel tired earlier and seem to get to sleep faster. Honestly I don't care why they work, just that they do work.

Well, that's about all for now. Just need to keep on keeping on and not do anything foolish over the next four weeks.
Posted by Chris W at 12:54 PM No comments: