What a difference a year makes.

I haven't done as much running as I would like this month due to the heat and taking extra rest (some of which was just laziness) and had to step up my game just to hit 100 miles for the month. I know I shouldn't stress about a random number but it was in my head. There was also some good natured peer pressure from the Twitter community that motivated me to log 23 miles over the last 2 days with 3 quality runs.

Since the weather hasn't been conducive to being out after 9 or so on weekends, coupled with my inability to get out of bed to be out on the road before the sun comes up, I'm actually taking a liking to these Saturday doubles.

Another thing I have going for me is the results of my latest Inside Tracker test. As I mentioned before, my iron levels were a bit off so I made some changes in my diet and supplementation which have me going in the right direction. 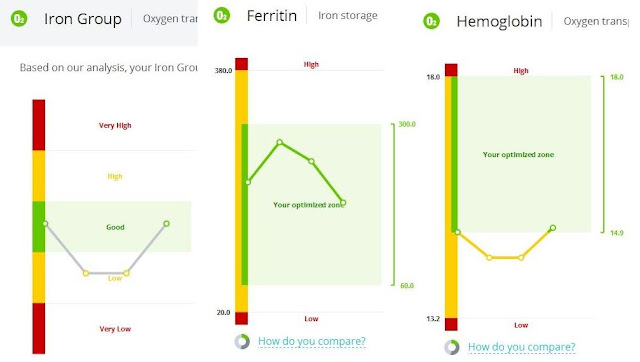 I've also optimized a few other markers that were off so now it's just a matter of staying the course and losing some weight.

As things sit today, every thing's in its right place and I hope to keep it that way. As long as I listen to my body and take extra rest when it wants it, I see no reason I won't do great in UT as long as I don't sweat the small stuff.

The dog days are here, that is for sure, but while it's been a productive couple of weeks I can tell the heat is wearing me down so it's time to back off a bit.

I started to notice it more in the past week as I have felt more fatigued especially in my legs. It didn't help matters any that I was overly ambitiously last weekend when I hit the local track to rip off some Yassos when it was over 100. As a result, I was absolutely thrashed for my long run on sunday and barely managed 3 miles before I has to walk.

It was more of the same for the next run on Tuesday where I opted for an easy 3 instead of the scheduled speedwork.

Since I've been here before, I know now that it's best not to fight it and realize that I will be better off to listen to my body instead of try to power through it. I've had enough with injuries to understand that it's preferable maintain my health as opposed to worrying about mileage. It's less than 60 days until the next BQ attempt and there is no way I want to be in the same boat as I was last summer.

After skipping my recovery run on Thursday I planned on getting a long run in yesterday. The only problem with that it this time of year I need to be out on the road no later than 6:30. Unfortunately I was lazy and by the time I got out after 8 it was already 90 and not a cloud in the sky.

Now I don't know about you but what kills me is the sun and not the heat which is why by the 4.5 mile mark the sun had me beat. No matter how well I'm hydrated it just kills me. At this point I knew that I was just going to have to struggle through 8 and maybe shoot for another run later in the day.

After running errands and recovering I felt like another run was in the cards by 6pm. Now even though the temp was around 105 at this point, the sun was lower in the sky which afforded for more shade. This to me is far more bearable so I hit the road for 5.

You may think I'm crazy but run 2 on the day was much better and I was able to maintain a mid-9 pace with little effort. This was a far cry from earlier where high-10s were a struggle. I don't know what it is but the sun just kills me.

The other good thing about doubling up yesterday was that it not only gave me the opportunity to sleep in today but it allowed me to enjoy a fine wine courtesy of one of my fine Twitter friends Dr Debster who by the way scored a PR in the Napa-to-Sonoma Wine Country Half today, achy achilles and all. I raise my glass to you DA.

And with that, it's back to the cube farm tomorrow and hopefully back on schedule for September.
Posted by Chris W at 4:45 PM 2 comments:

Well, I did it again.

As much as I intend to keep things updated, I often don't have the motivation to write. Time can be an issue but mostly it's that I don't don't consider my training interesting. I'm also not as obsessive about it as I was in the past so I'm no longer sweating every little detail. While I do have a plan as far as distance and intensity I'm more open to scaling back as my body tells me.

For starters, I finally broke the 4 hour barrier with a 3:56:37 finish at the Phoenix Marathon back in February. Conditions were perfect on race day with temps around 50 for the 6:30 am start. The race was well organized and other than having to be up at 3 to drive 45 minutes to get on a shuttle to the start I couldn't ask for better. I just wish that they had a drop area with a shuttle nearer to the start because this would have gained me at least an extra hours worth of sleep since I live relatively close by.

Logistics aside, everything went great. I was on an early shuttle so I was there before it got too crowed which afforded for a good spot around one of the many fires they had for us. This also meant that I had plenty of time to relax and stretch before things got going.

The one thing that drew me to this race was that it is mostly downhill save for a pretty good ascent around the 4.5 mile mark along with some smaller hills toward the end..

To say I was happy with the outcome is an understatement. Although I stopped a half a dozen times to go, I was able to run the entire course without bonking while maintaining fairly consistent splits. This actually provided me with the confidence that I could BQ.

With this success, I began to look into finding a race my next BQ attempt. Having a few options for September races that a fast qualifiers, I decided on running the Revel Big Cottonwood Marathon in Salt Lake City UT which features an over 5000 foot descent.

My thinking here is that I felt great on the downhill for Phoenix so why not try for something bigger. One of the issues I did have in that race was that I paid the price in my quads for not having done any hill training.

For this race I'll be ready because fortunately I have Usery Mountain only about 30 minutes away. While not nearly as big or steep, it gives me a nice 3 mile stretch with a 600+ foot drop to train on. I've already done it a half dozen times since the beginning of May and intend to do it at least that many more in the coming 2 months.

Other than this nothing big has happened run-wise. The only other race I have done was a 5K back in April which wasn't anything spectacular as well as participated in the United Relay. Pretty much I have been logging quality miles as I close in on 700 for the year and most importantly remaining injury free.

On the nutrition side of things, I've been pretty good save for a junk weekend for Memorial Day. I've had a couple Inside Tracker tests and overall things look pretty good. Need to work on my iron absorbsion but other than that I'm good.

Still, even though I have been eating clean, I'm struggling with my weight which has been between 155 and 160 for a while now. I'd prefer to be down to 145 or less fully hydrated for race day.

A lot probably has to do with stress at work but mostly because I do a piss poor job of getting to bed when I should. I seriously need to get into the habit of going to bed before 9 instead of staying up watching TV and using my phone. Problem it, when I do get to bed early it takes me too long to get to sleep so I wind up tossing around for a while.

One last thing to mention is that I've about hit my 4 year runniversary. I can't find my training log but I started running again some time around this holiday weekend back in 2012 and have run about 4000 miles since then. Not too shabby if I do say so.

What I'm the most proud of though is that Christine has kept up with her running over the past year and has shown steady progress as she ups her mileage, now in the 60s per month, and has her 5K time down to 41:26. Bravo

So there you have it; nothing too exciting. Just happy that I can get out and run.
Posted by Chris W at 2:34 PM No comments: