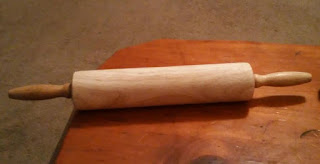 It's late so this will be short. Not that this is a bad thing since the same can be said for my runs as I work my way back.

Now you may be asking yourself, what's with the rolling pin? Well the Nurse Practitioner at my Chiro's office recommended getting one to roll out my calves. He said they are cheaper and easier to work with than a stick and for $6 he was right. It works like a charm.

After rolling out last night I felt great today And really was hoping that I could push the distance a little. I know I can't make up for lost miles but I really want some endurance back. It was quite nice, in the low 80s, as the sun was setting but that wasn't a worry since I had my Run-Bright light and flashing arm band to help me be safe and be seen while out on the road.

The first couple miles felt great but shortly after passing the 2 mile mark I could sense that my legs were going away a bit. This was probably for the better because it made me turn toward home instead of trying to go further.

By the time I hit the 3 mile mark, my calves started to let me know they were there as did the PF although it was relatively light.When I got to 4 I was glad I had made the turn when I did and concluded with 4.2 miles in the books. I was happy with it and it was longer than I had been going so I'll look at it as a win. Tomorrow will be a rest day and back to the Chiro for more therapy.

Speaking of the Chiro, Christine had to head over today. She hurt something a couple of weekends ago and even though she hadn't ran since her foot swelled up today. This was unexpected since she thought it was getting better and it looks like it may be a stress fracture. She'll know in a couple days after she gets it X-Rayed. Poor kid she was so looking forward to the 5K on Sunday too. But such is the life of a runner.
Posted by Chris W at 9:53 PM