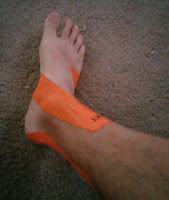 Woke up this morning and the PF felt pretty good so today's 90 minute run was on with a couple strips of KT Tape for insurance. I probably could have gone out yesterday but I try to stick to the rule of when you feel ok take one extra day. It was going to be another warm one with temps already over 80 and with not a cloud in the sky, it felt even hotter.

The schedule called for a run under 137 bpm but since I missed yesterday's free run I decided to shut off the HRM warning and get it in today. I even had some thoughts about going longer but knowing that was not going to be a good idea I only brought enough fluid for a 90 minute run to put the kibosh on that.

With a good warmup mile behind me it was time to pick it up. My goal was to keep the pace comfortably fast, which I was hoping would be somewhere around 10 minutes.

Mile 7 was going to be the last fast mile and I wanted to see how hard I could push it. I was really hoping to do the entire mile in the mid-8s but after about 4 tenths at that pace my HR was up to 174 and I knew it was time to slow down and get into an early cool down. For the next mile I jogged my HR down a little and walked the last half mile to complete the cool down.

I have to say that in all I was happy with the run. My PF was not too much of an issue although it was a little more achy than I would have liked; maybe a 3 or 4 on a 1-10 scale. What was really the big surprise was the shear blister on the bottom of my left foot just below my big toe. I hadn't been lubing up my foot with Vaseline lately and hadn't had any issues so I thought I was safe. Well I guess not.

I'll be interested how the PF feels tomorrow but as of right now, it's not too bad. Tomorrow will also be a rest day too so I should be fine to get back at it on Tuesday.
Posted by Chris W at 2:07 PM