Just because I ran the a race in the morning, it doesn't absolve me from getting in my miles so today was going to be a twofer. After the 20 minute ride home, a change into my new Skora Tempos and a quick warmup, I was back out the door.

I could tell right away that this was going to be a tough run. Try as I may my HR came up pretty quickly into the high 120s even though I tried to take it up slower and by the .4 mile mark I was in the 130s. All this meant was that I would need to take it slow. 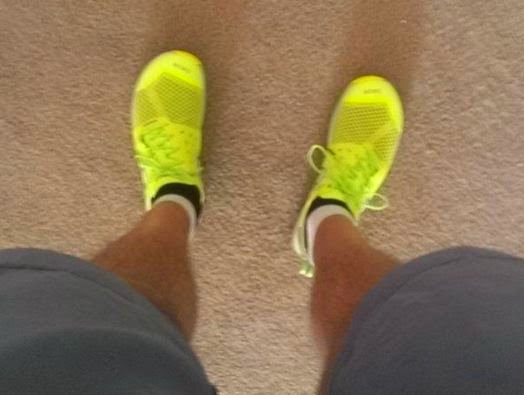 This really wasn't a bad thing since I was in new shoes after all. The Tempo is Skora's latest model and is somewhat a departure from their minimalist roots with a 22 mm stack height. Otherwise the shoes feature Skora's asymmetric lacing and have a very thin mesh upper which makes these shoes are incredibly light at under 8 oz. I was thrown off by the arch support, which is a first for them and I didn't know what to think of it.

The first mile went quite well considering and was actually on par with what I have been running although that was with a much lower heart rate. I actually felt pretty good and was looking forward to the planned 6 miles. I was also feeling good about the Tempos which didn't feel as clunky as when I first started out.

It wasn't too long however before the HR wanted to stay up around 135-135 and I began to feel it in my legs as well. This wasn't completely unexpected though as I began to consider scaling back the run. It doesn't help anything to push too hard especially with 20 miles on the schedule for tomorrow. By the time I got to the 2 mile mark, my HR decided that it was time to take a short walk break and head back.

Mile 3 was more of the same with another walk break when I had a sudden spike up to 142 bpm. As I began to slow it down even further I was finally able to get down into the low 130s for the last mile to close things out. Again, this was higher than I would have liked but it was better than nothing.

When I got home, Christine was prepping a breakfast of bacon and eggs. She finally knew what it meant to be rungry. I'm also happy to report that there were no issues with the new kicks so I'll be taking them out again tomorrow when I visit #ChurchofSundayLongRun