It was another early Saturday morning to get out an run the inaugural Run3rd 5K. I was pretty exciting for this race because it would not only be my first 5K in over 7 months but more importantly it would also be Christine's first foray into the running world that I inhabit.

With the race scheduled to start at 8 and a plan to meet up with some people from work beforehand, we were out the door and parked by 7am. It was nice to have a race relatively close to home, only about a 20 minute drive, for a change. As far as the meet up I should have known better and set the time earlier since everyone lived a bit further away.but we hooked up got some pictures and made our way to the starting line.

I settled in about 5 or so deep noticing that there were a lot of families and young kids to the front which was going to make things interesting when the race started. After the usual formalities, the race was off and after working my way though masses I was soon in open space. The goal was to settle in somewhere in the 6:45-7 minute range and see how things felt. With this being more of a systems check race I tried to stay mindful of what my body was feeling.

As the first mile progressed, I was moving along nicely but occasionally caught myself going too fast and had to scale it back a bit otherwise I'd be toast later on. By now I was starting to pass quite a few people who burned themselves out early and had a feeling I was in the top 10 or so.

When I hit the first split at 6:39 I was a bit concerned with the confirmation that I had indeed gone out too fast. On the plus side my HR was still reasonable in the high 170s and I was still breathing at a 2:3 ratio.

Into mile 2 I slowed up a bit but also began to notice I was gaining on a young girl ahead of me. She couldn't have been more than 12 or 13 but was obviously a very good runner. This helped to spur me on but I knew that I had to run my race and not worry about trying to beat someone else. Eventually I did catch and pass her but now I was starting to feel the effects of the pace even though I was running closer to 7 minutes.

The one disappointing moment of the race came when the woman who was about 20 yards ahead of me and must have been in a nice zone didn't notice the support staff instructing her to go right. Instead he went left to follow the slower runners and this would cost her the woman's division win.

It wasn't too much before the 2 mile mark were I would be overtaken by another runner. While I entertained the thought of going with him I remained on course to run my race. By now my legs we getting a little heavy and my breathing was now at 2:2. In addition to this, my HR was now in the mid-180s and I didn't want to take it any higher.

Mile 2 finished in 6:56 which was more in line with were I wanted to be. At this point I was by myself but I was aware that I had some competition not terribly far back.

Now was the time to see where my fitness level really was as I began to push the pace to see how much I could sustain. The good news is that it didn't kill me but I also found out I wasn't where I needed to be and took it back down so I would have something left at the finish. 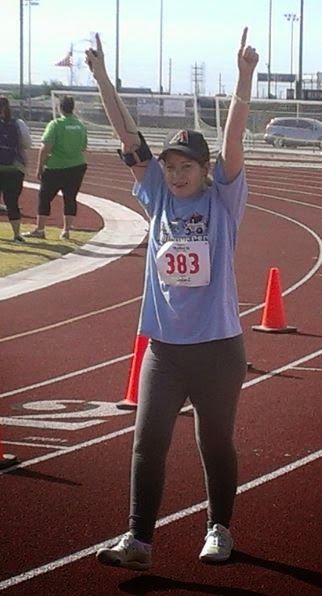 I finished mile 3 at 6:50 and as I was about to enter the track for the final tenth, race organizer Kris let me know that I had company coming up from behind so after a quick glance back I turned it up. I was glad to have my kick and as I chugged through the final turn, I saw our company's president at the edge of the track waving to me as she prepared to snap a picture. With a final burst I crossed the line at 21:38 according to my watch. Officially I finished the race in 21:17 (3rd best 5K) which was good for 8th place overall and 1st in the 45-49 age group.

After the race I hung out with my coworkers as well as a quick meet up with the #RunEatTweetAZ gang as I waited for Christine to finish. It was also great to see that 2 of my coworkers also earned podium spots for their efforts.

With the race winding down we soon saw Christine coming along and as she made her way toward the finish, I could see that she was grinning from ear to ear. The bug had bitten her. Soon she was crossing the line with her first race under her belt in a respectable 52:31. I am so proud of her. Great job kid!!

I can't say enough about how well organized this race was and how much effort went into it. Race organizers Mindy and Kris Przeor went all out with their efforts to make everything work just right and I hope they put this race on again next year. Thanks for everything you and your volunteers did and good luck Kris in Boston in a little over a week.
Posted by Chris W at 10:04 PM