I have to be honest, I was dreading today's 16 miler. Long runs can be tough enough when you're conditioned for them but building back up makes them all the more difficult. Throw in  the heat, it went from 63F to 89F over the course of the 3+ hours I was out there, and you have the makings of a brutal run.

Don't get me wrong, I embrace the suck because I know it will make me a stronger runner and there is no substitute for tough miles. It is far better to get them out of the way during training than it is to have them sneak up on you in a race. Been there, done that, don't want it to happen again (although it probably will).

All things considered, today's run felt better than last week's 14 which felt better than the previous week's 12. Granted I was much slower but that was the plan; it's all about endurance now with speed coming later. I still have 5+ months to get faster.

The first 8 miles could not have gone any better as I had very little trouble keeping my HR down below 130 bpm for the first 6 and in the low 130s for the next 2 without ever going above 137. Well except for the time some jackass who was too busy on his phone crossed the fog line as he approached me

This especially pissed me off since I had been doing so well. I was on a stretch of nearly 2 miles running along a field where the evaporation of the irrigation not only increased the temperature but increased the humidity level quite noticeably as well. Thanks douche for harshing on my mellow and knocking me out of a great zone.

Just after mile 8 I decided to take a brief rest stop and walk for a bit. It was starting to heat up and I figured it would be wise to take a rest before I needed one. This seemed to help and I was able to chug along pretty steadily until I started to heat up at mile 11. Again, I didn't need to stop but why push it. It was now in the high 80s so why overdo it when I'm not heat adapted just yet. 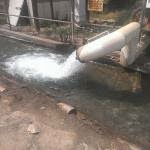 These 2 breaks did wonders since it wasn't until I approached the 13 mile mark that the run really became a challenge to keep my HR down. Instead of fighting it I took walk breaks as needed including a refreshing stop to soak down my shirt at my favorite watering hole as I came up to mile 14.

Talk about cooling off. While the water was on the warm side, it felt icy cold when it put it on my heated up torso. Boy did it feel good but between the heat and the breeze it was dry before I knew it.

Even with this cool down the run was starting to wear me down and as I passed 14.5 miles it was a matter of just gutting it out and walking if I had to. Still I was satisfied with the way the run went and I was done soon enough. Hard, yes but the hard is what makes it great.

Once at home I got in a short stretch to cool down and was then treated to bacon and power coffee (bulletproof coffee without the fancy, expensive ingredients). This was followed by a short nap.

Tomorrow will be a short core workout before 6 miles on Tuesday. Now to chill for the rest of the day.
Posted by Chris W at 4:44 PM