Let me just say that I can't believe it has been almost a week since the marathon. What's even better is that there was very little post-race soreness which came as a bit of a surprise.

Even more of a surprise is that I don't miss running as much as I thought I would during this self-imposed recovery period. Having been grinding out miles consistently since last March, it's actually been nice just take it easy and not have to put forth the physical as well as the mental effort that it takes to get out 5-6 times a week.

I'm also happy to report that I haven't gained any weight this week as I've been on point with regards to my diet. Once you commit to eating clean it becomes a habit. Also, since I've been keeping my fat intake up, my hunger is suppressed and I've also managed to stay in ketosis. Yay me! It helps to have a great nutritionist in-house too.

There has been one side effect to not running however; my ability to fall asleep easily. It's not like I am one of those people that fall asleep easily to begin with but I forgot just how much trouble it was for me. A lot has to do with the extra mental energy I have so my mind tends to race and the slightest little thing can pull me awake as I descend into sleep.

Overall my body seems to be recovering pretty well with nothing noticeable in the TFL and only a bit of occasional discomfort in the heel which on a scale of 1-10 it's probably a 1.5 or so. As of now I'll most likely stick to no activity for another week before I get in a stretch next Saturday in advance of a run on Sunday; Garmin or not. On that front, I got an email that they received it and I should have the replacement in 10-14 days.

I think I have my schedule pretty much ironed out for the next 3 months. March will be easy base rebuilding, April will be fast and May will be ramping up the mileage. The goal for May through August will be to get in as many 20-30 mile runs as possible. I want to get my body used to this to the point where it becomes easy, relatively speaking. What I mean here is that I can run this distance as stress free as I can run 10-13 now. We'll see how that goes. 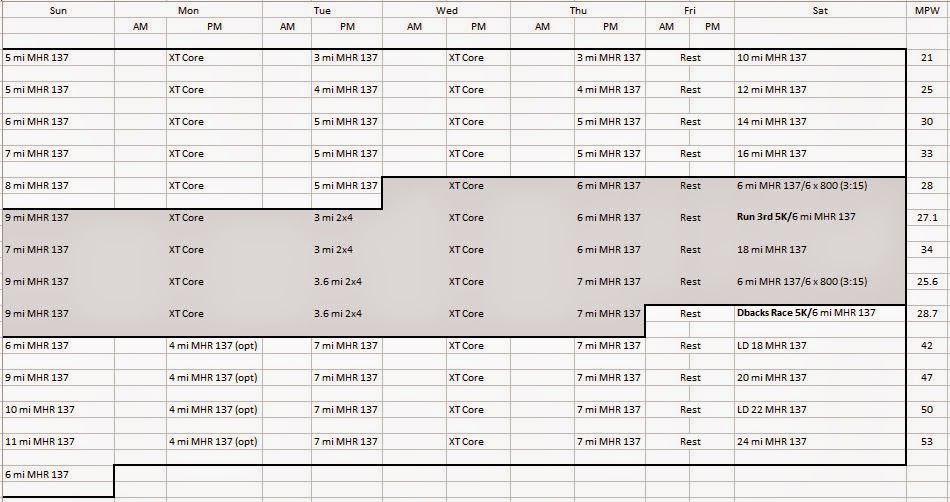 I also need to decide on a September BQ race. Right now it's a toss -up between Last Chance BQ Chicagoland and Last Chance BQ Grand Rapids with Illinois looking to have the early edge based on flight availability and cost. Other than that both races appear to be equal; loop courses, pacers, "elite" support, weather and flat. IL is probably a little flatter but the small roller in MI is not any concern and could make for a nice change for the muscles. It also may seem trivial but IL has a far more informative website which includes a video of the course.

So that's where I'm at right now; nothing too exciting. Now to go and enjoy a beautiful winter day in the desert.