What an amazing experience and what a well-organized race the 2015 Lost Dutchman Marathon was.

The day, or should I say early morning started off right as I was up with my alarm at 3:30 as planned; not that I had that great of a night's sleep with the pre-race nerves. Since I was planning on leaving the house no later than 4:30 this gave me plenty of time to have my smoothie, power coffee and be out the door by 4:20 for the 30 minute ride to the shuttle area.

Once in the lot I futzed around in my car doing a last minute gear check/mental prep before I boarded a school bus to the starting line. The ride was pretty quiet with only a few runners chatting among themselves. I was pleasantly surprised and quite happy that Christine was up texting me at 5 to wish me well and joke around a bit. I really couldn't have done this without her support during my training and I hope she knows how much I appreciate it.

The ride to the start was almost a half hour and when we arrived there the area was set up with mats to chill on with little fires by each to stay warm. They also had plenty of Porta-Potties, water, coffee and food available. Sorry for the terrible picture but it's hard to get a low light shot with a cell phone. 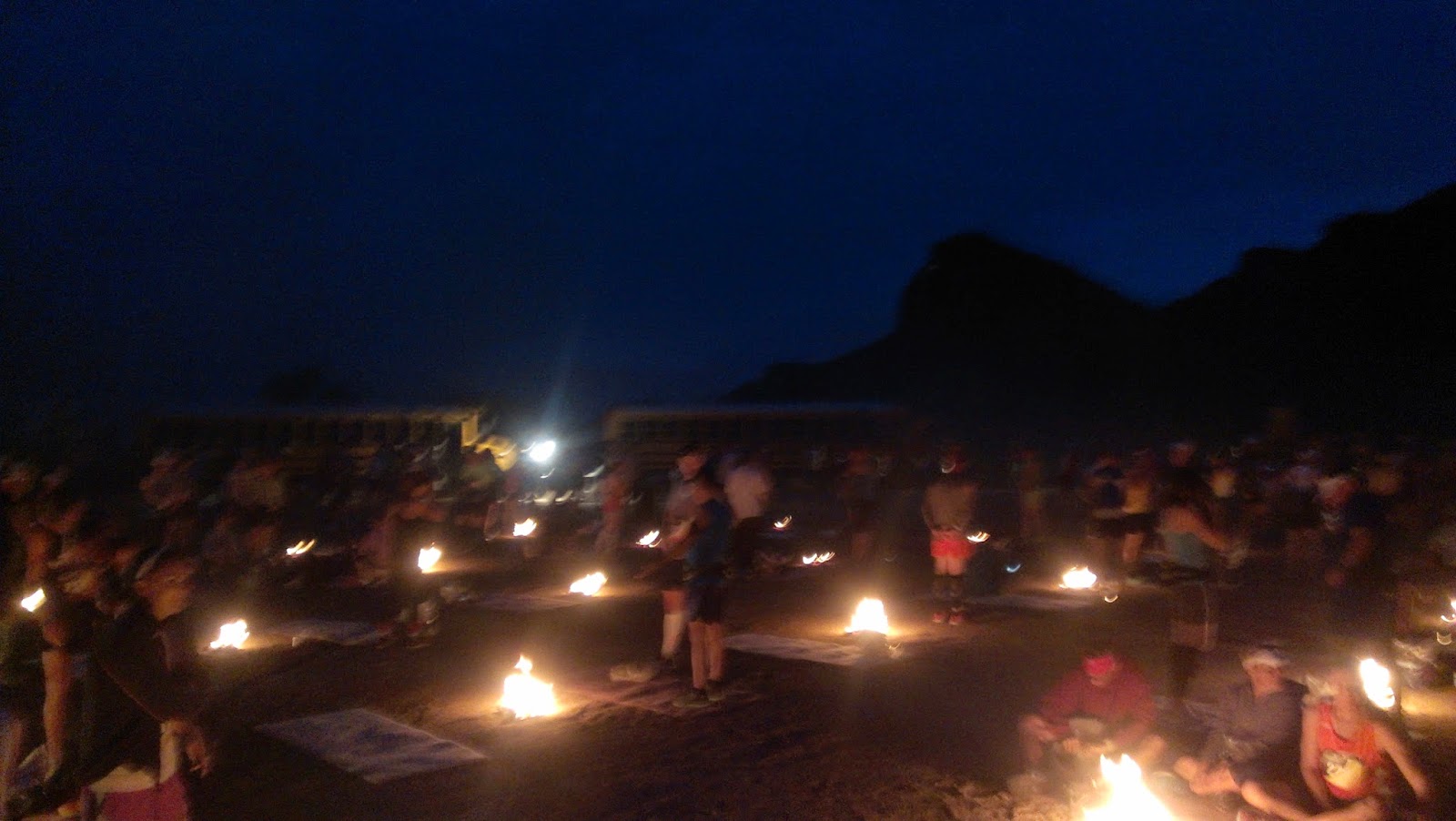 With the start of the race an hour and a half away, I found a mat and relaxed for a bit. As more buses arrived, there was a need to share mats which was cool and we got to hang out with our fellow runners. My little group included a guy from Minnesota who was on vacation with his girlfriend to visit family and a local girl who started marathoning last January and was now doing her 10th.

Just as the sun was starting to come up, Kris of @RaceEverStep found me and we hung out before we had to head to the starting line. Kris and his wife Mindy are great people and so very supportive. They're also organizing the inaugural Run 3rd 5K and virtual 5K coming up in April.

Once at the start Kris and I parted ways (he is much faster than me) and I settled in at the 10 minute pace sign. It was only now that it hit me that I was about to run 26.2 miles; holy crap! Fortunately it was a cool and cloudy morning; my only hope was that it would stay this way. 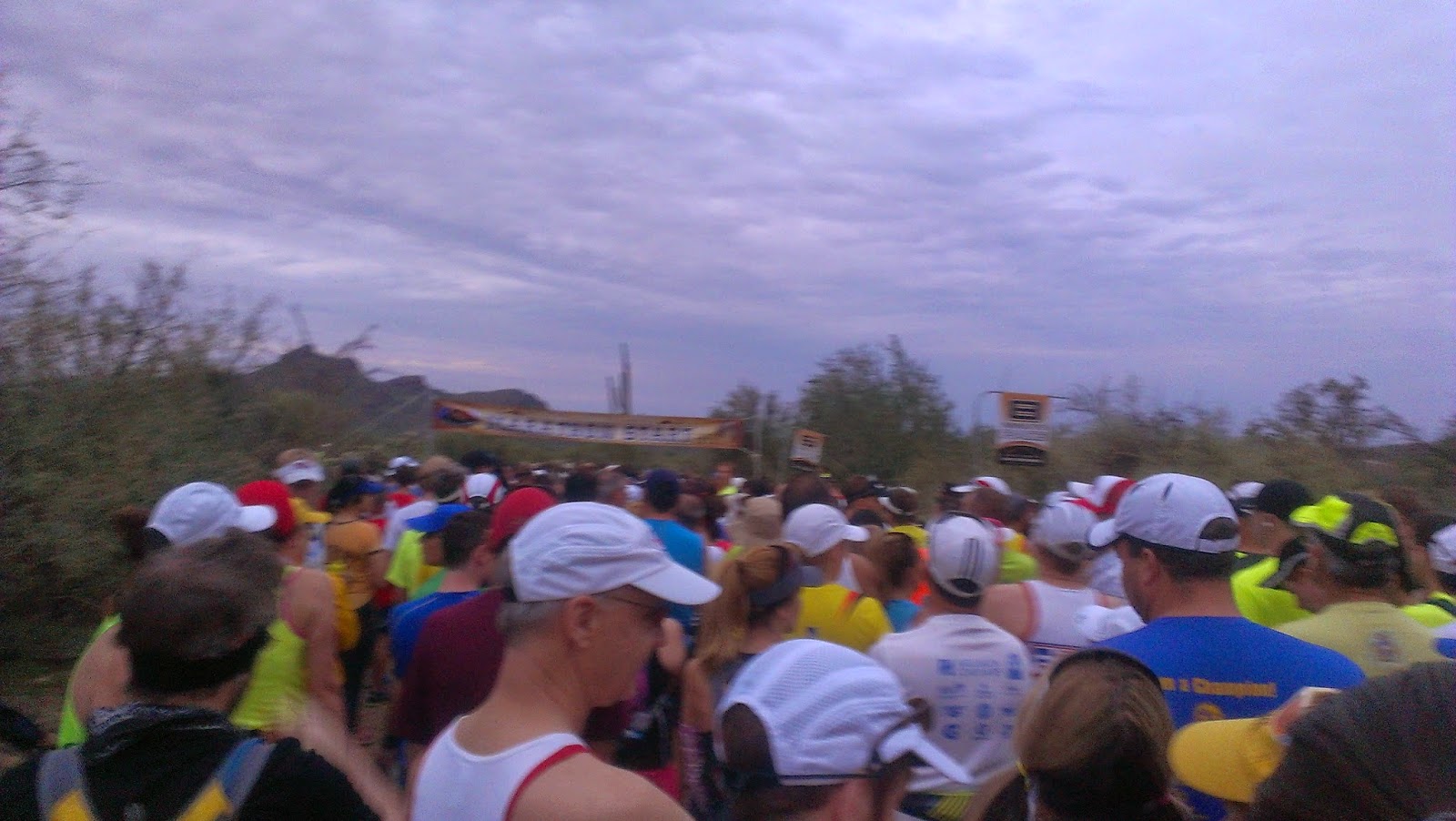 When the gun sounded, we were off on a dirt road which would wind up and down through the desert for the first 6 miles. Since it was mostly downhill with an overall vertical drop, my pace was 30 seconds faster than I would have liked at around 9 minute miles but I felt comfortable as stuck with it. Even though I knew there was Porta-Potties every 2 miles along the course, I opted to jump off the course at the 5 mile mark to make a quick rest stop behind the cover of a large bush.

With the trail ending we hit the first residential community we were greeted by 20 or so spectators. It always lifts my spirits to see people come out to cheer us on and I make the attempt to thank them for it whether it be a "thank you", a thumbs up or even an occasional high 5.

As we exited this community we turned onto US 60 for a mile of relatively flat ground. It was a nice break from the downhill and provided a bland environment to get my head into the run after the fantastic desert scenery we had just left. I knew that once we hit Gold Canyon we were in for the first uphill segment of the course.

In hindsight, I should have made it a point to have driven this section prior to the race. The hills were more challenging than I expected and I wish I had been more mentally prepared for them. Still, I had fueled with my ENERGYbits at the 7 mile mark and I was still holding my pace in the mid-9s. There was also great crowd support as we entered Gold Canyon as well as patches of spectators along the way. I also managed to strike up some quick conversations with 2 woman who were there to support someone and kept going ahead after they had passed. It was fun to chat with my "stalkers" and added some levity to the run.

The peak of the hills was right about at 13 miles so not only was I half way to the finish but the next 3+ miles were going to be relatively easy. I also knew that I would be heading into the portion of the course that I was familiar with, having run it 3 times in the past 45 days. There would be no surprises, or so I thought.

Prior to turning off the freeway again, I took the opportunity to fuel up on ENERGYbits and got ready to take another planned rest stop. This shows how well the race organizers had things set up as at the 17 mile aide station along with water, Gatorade, GU, bananas and oranges, they even had Q-Tips with Vaseline.

After a quick stop, I was off to tackle the meat of the course. Having been here before, I was confident in my ability to maintain my pace which had slowed to 9:40ish. Even though my feet were beginning to hurt, I was still feeling pretty strong as I hit the steepest hill at 18.5 miles and actually did rather well attacking it.

What I failed to evaluate properly, and was soon to pay the price for, was that at the rest stop I noticed my pee was dark yellow indicating that I needed to hydrate more. Also that the sun had begun to come out with the temps now approaching 80. Not a good combination.

Even as I made the turn to begin the decent down the hill I felt good but suddenly, as I passed the 20 mile mark, my legs began to feel heavy and I was beginning to bonk seemingly out of nowhere. This made for a great training/nutrition lesson in hindsight but at the time all I could do was stop and walk. Gone was the illusion of this being easy and finishing strong, now it was a matter of surviving and finishing.

The last 6 miles were brutal to say the least as I managed to put together a few good strings of running with some lengthy walk breaks thrown in. The sun was beating down by now but not analyzing my situation clearly enough, I still didn't take in enough fluid nor did I fuel with anything besides more bits and my creamed coconut-raw honey-salt water. In hindsight, and I hope to not make this mistake again, I'll make sure to have some carbs both pre-race as well as during.

The support from the other runners was great as people who passed me urged me on. This also included a couple of guys that were in the same boat as me as we kept passing each other then falling back as we took our breaks.

These last miles were tough but when I got to mile 25 I realized that I still had an outside chance in finishing under 4:20 if I could step it up. More realistically I could still get in under a 10 minute pace so I sucked it up, completing mile 26 in 10:11. As I made the turn into Prospector Park for the last hundred yards to the finish, I set my sights on passing one final runner as I made my way past the cheering crowd lining the finish chute. I crossed the line with my arms raised triumphantly in the air and when I stopped my watch my time was 4:21:27. I was a marathoner.

It didn't hit me until a few minutes later as I slumped over the railing to catch my breath what this meant to me. I thought about all the work that went into it, my late Father-In-Law who this was dedicated to as well as all the people who supported my along the way. I had an emotional moment then smiled as I pulled myself off the railing and admired my new bling. 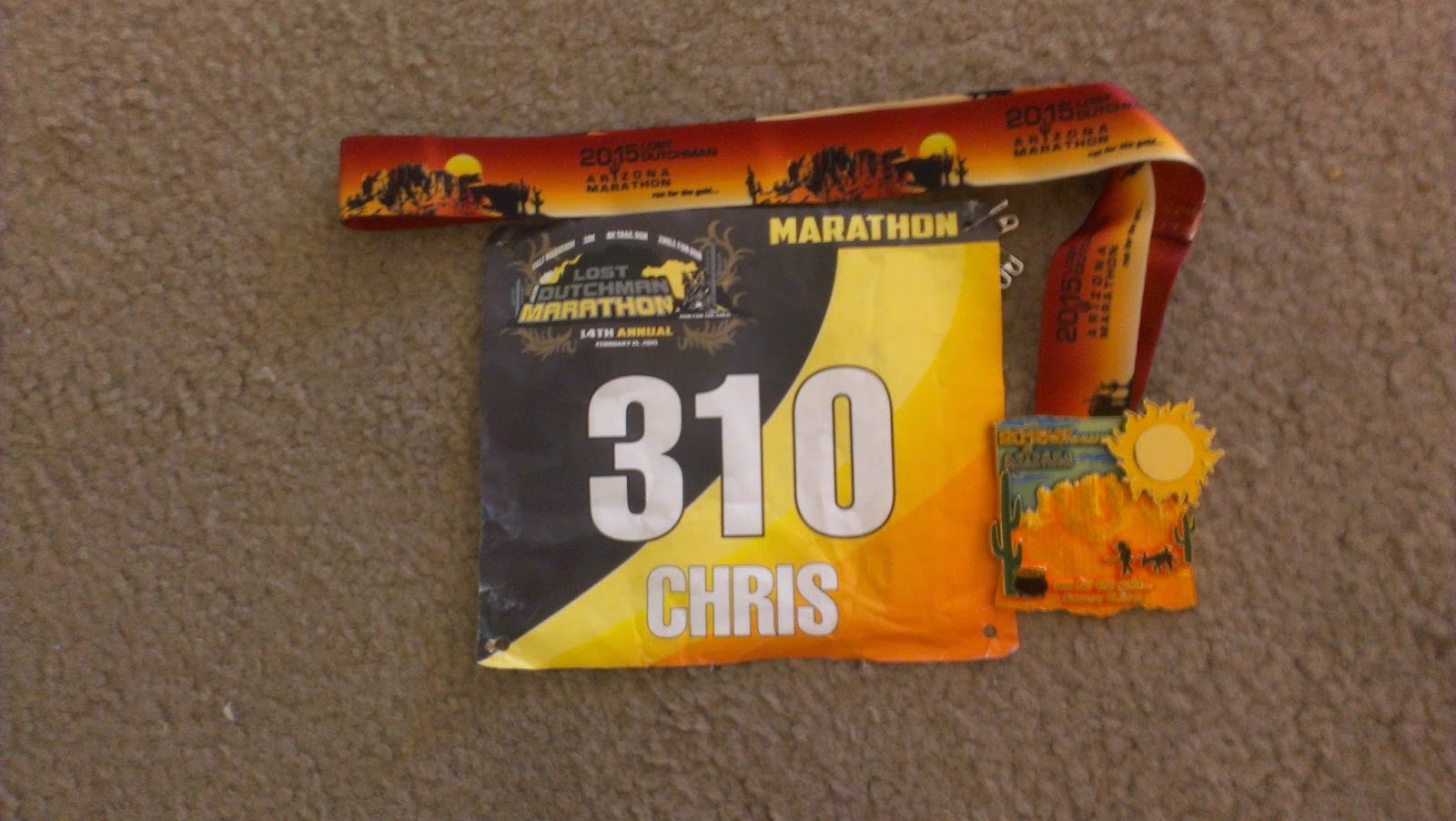