The Road To BQ 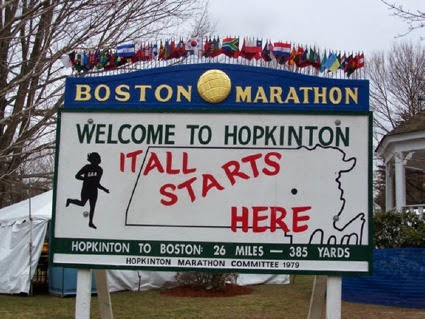 The best way I have found to combat this is to think about running. Whether it's looking forward to an upcoming race, planning strategy for achieving a goal or just simply wondering what I'll tweet about the run gets me back in the now. As long as its something positive about running, I easily slide back in the now.

During today's LR one of these little mental breaks turned to thoughts of qualifying for Boston in 2016.

Now the thought of running a marathon was something I didn't think was in the cards. Sure, it was something I dreamed about when I was much younger but downplayed the idea as I got back into running. Training for a half was hard enough, where was I going to find time to train for a full.

It wasn't until a conversation with my younger brother where we both came to the conclusion that IF 26.2 was going to happen for either of us then it would only be worth it if qualifying for Boston was the prize. We both laughed it of since we both knew that a BQ on the first shot would be nearly impossible.

After a day or so after trying to convince myself that attempting a marathon was a silly idea, I signed up for one anyway. While external forces prevented me from running that race last February, I'm 6 weeks away from take 2.

Every time my mind wandered today, I couldn't help but think of a hashtag I saw from Jonathan Levitt (@JWLevitt) on NYE; #RoadtoBQ. I just couldn't get this out of my head.

It hit me that this was meant to be my my motivation and you can imagine my surprise when I found that both Road2BQ.com and RoadToBQ.com were there for the taking. I quickly snatched these up and here we are.

Now I bet you're wondering about today's run; well it was a chilly 15.9 miles.

Temps were in the high 30s/low 40s and since I had too much water before I went out, I had to take a quick break before mile 2. This pit stop further took me off track since I thought it would be a good idea to run down on the creek bed instead of the trail. Not having checked this out beforehand, I realized it was a mistake when I hit a big patch of mud. Live and learn.

For the most part it was a pretty uneventful LR. Aside from a bit of a niggle in my right Achilles and intermittent thoughts of going longer than the planned 16, I moved right along. It wasn't exactly a great run but since I had to take 2 bathroom breaks and a couple stops to get the large clumps of mud off my shoes I'm happy with the 2:49:37 and considering that when I last ran this loop on 11/9 it took me 3:13:1; an improvement of 1:15/mile in roughly 2 months.

Thanks for stopping by and I hope you enjoy the Road 2 BQ as much as I do.