On the suggestion of a fellow local runner Kris (@RaceEveryStep) I planned a 16 miler as an out and back from the finish of the Lost Dutchman Marathon to get a feel for the course. Having run the half in 2013 I had an idea about what I was going to face since my run today was basically the half and then some.

The most vivid memory I had from that race was the seemingly never ending hill that started at mile 9. Since this race was my first half with the initial 6.5 being mostly downhill I had no race management plan and thought this hill was going to be the end of me.

Well, 2 year later I'm a smarterer runner and have a somewhat better understanding of pacing (I said somewhat) .Also with HR training I had no intent to run hard anyway; just slow and steady under 132 bpm. As you will see later, that didn't work out so well.

As I started out on my trek it was a breezy, overcast morning in the high 50s and the sun was just starting to appear from the base of Superstition Mountain. I knew I was in for a challenge but having the spectacular view of the mountains would certainly be a plus. 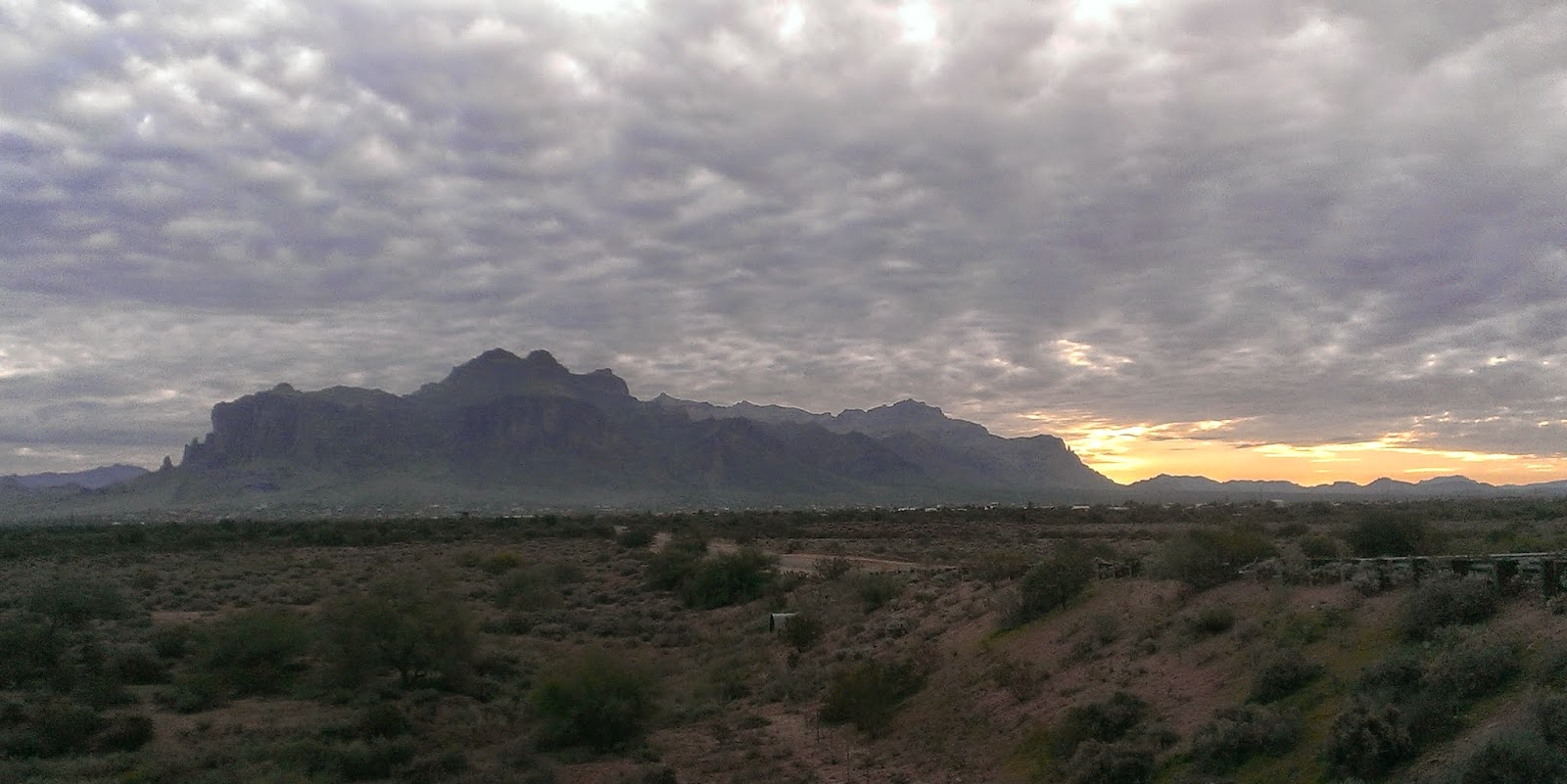 Once I was out on the road I remembered how much the road rolls. This isn't one of the flat courses that I have become accustomed to as I run through the area where I live; instead it is a constant down and up.

After an initial incline through mile 2, the next 6 were going to be mostly downhill with a tailwind on the sections where I would be heading south. There was a lot of heading south.

Other than a stop to take some pictures and a rest stop at the turnaround, these first 8 were fairly easy and uneventful, only a few cyclists and another runner. As I began my way back, I dreaded what was about to come. After all what goes down on the "out" goes up on the "back".

One thing I did notice as I headed north was that the wind had died down. This was certainly a welcome relief and would make the return trip somewhat easier. Still, even on my normal runs I tend to feel fatigue at around 12 miles but this time it wouldn't be flat ground but rather my old friend.

Today was shaping up to be a different run though. As I made my way back, I felt strong and would have been more than capable of pushing the pace but my HRM was already going nuts. Try as I may, I couldn't keep my HR under 132 bpm as I made my way up the hills.

I'm fully aware that this is where I should have stuck to the training method and walked to stay under my prescribed rate but I had a pretty good reason to shuffle along at the higher rate. My reasoning is that I will be running this course again in 6 weeks and will have enough going on psychologically that I don't want my muscles to remember that they had to walk on tone of the toughest portions of the race.

By the time I had gotten to the point I was dreading the most, the wind had picked back up and the sun had broken through the clouds. I was beginning to get hot too. Wisely, I had worn a muscle shirt under my long sleeve tech shirt and off came the long sleeve.

As I plodded along another runner was coming from the other direction and we couldn't have been dressed any differently. Where I was in shorts and a muscle T, he had on tights, a jacket, gloves and a stocking hat. As we waved and exchanged greetings I imagine his thoughts about my attire were about the same as I thought about his.

Before I knew it I was about to crest the hill that I had feared so much and I still felt great. The worst was over and I only had 2.5 miles of rolling downhill to go. This was indeed a victory and content with the way things were going I smiled and admired the mountains as I pressed on to the finish.

And now it is done. With the Rock 'n' Roll AZ half next Sunday, there will be no LSD next weekend. I'll keep up with my regular schedule during the week but I'll only do an easy 3 on on Saturday. With the way training has been going in building my aerobic base and how well today went, I feel confident that come Sunday I'll own a new 13.1 PR.

Today's training run has also given me more confidence in my ability to run 26.2 and subsequently BQ later this year. I've got this course scheduled 1 more time a couple weeks before Lost Dutchman and instead of fearing it I know I'm going to own it.